Pianist Evgeni Bozhanov – one of the greatest discoveries in the classical music world over the past decade. Dallas Morning News marks: “Evgeni Bozhanov can produce more nuances of tone in a measure of music than most pianists find in a lifetime, but everything seems so organic.” Today he is invited to perform to all major concert halls, such as Berlin Philharmonie, London’s Royal Festival Hall, Musikverein Vienna, Tonhalle Düsseldorf, Tokyo’s Suntory Hall among others. Just recently Bozhanov came back from the concert tour in Japan with the Deutsche Sinfonie Orchester Berlin and Yutaka Sado.

Bozhanov won prizes at most important piano competitions, including the Van Cliburn in Fort Worth, Texas, USA and the Queen Elisabeth in Brussels. “One by one jury members stopped moving, stopped writing and became absorbed like spectators at a bonfire and simply sat back, watched and listened to this extraordinary outpouring of a supremely individual musical conception.” - wrote musical critic Michael Moran from Australia, who was following Van Cliburn competition.

Although Bozhanov was one of the clear audience favorites at the Chopin International Piano Competition in Warsaw in October 2010, he was not awarded the top prize, which led to a controversial debate in the Polish press and spontaneous invitations from the major Polish concert promoters and orchestras. Bozhanov’s playing elicits keenly enthusiastic reactions from audiences and critics alike. “I never thought I would witness piano playing of this quality again,” exclaimed an elderly lady in Warsaw. “I heard Lipatti, Horowitz, Michelangeli in concert – Bozhanov is from the same planet.” “He is a true artist, so different from other pianists. He is a painter. So many colors and dynamics in his playing. Master!”- wrote other listener.

Evgeni Bozhanov was born in 1984 in Rousse, Bulgaria and began piano lessons at the age of six. He made his public debut in his hometown when he was twelve, playing a Mozart piano concerto. From 2001 to 2006, Bozhanov studied with Boris Bloch at the Folkwang Hochschule Essen and from 2006 he continued his studies with Georg Friedrich Schenck at the Robert Schumann Hochschule Düsseldorf. 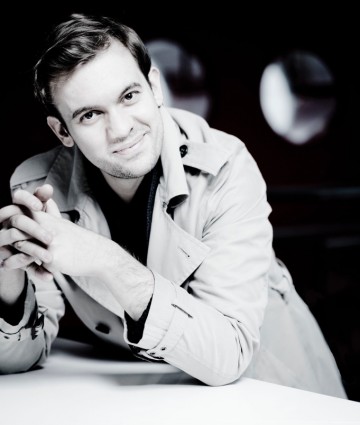