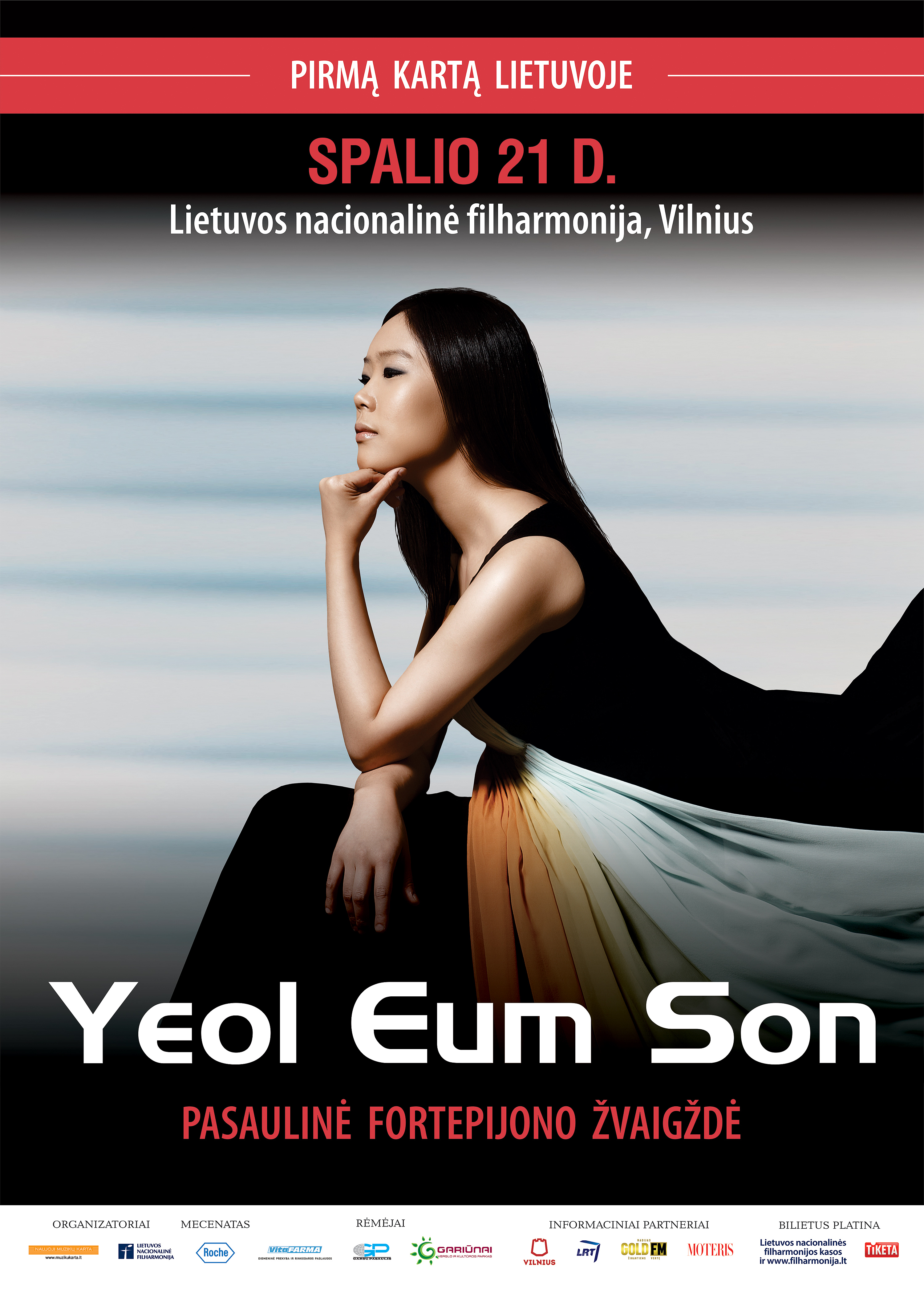 Pianist Yeol Eum Son will appear on the 21st of October

NMG is announcing, that due to covid-19 situation in the country the planned duo concert of pianist Evgeni Bozhanov and Yeol Eum Son for October 21st is changed to solo recital of pianist Yeol Eum Son. All bought tickets will be actual.

Tickets: At the box office of Lithianian national philharmonic hall and at Tiketa

Solo recital of pianist Yeol Eum Son will be presented instead of planned concert with piano duo of Evgeni Bozhanov and Yeol Eum Son. These changes are made due to Corona virus situation in the country. All bought tickets will be actual for this concert. Listeners do not need to change anything.

Yeol Eum Son’s graceful and timeless interpretations, crystalline touch and versatile, thrilling performances have caught the attention of audiences worldwide. Praised for her widely eclectic concerti repertoire, ranging from Bach, all-Mozart, early German and Russian Romantic to Gershwin and Ligeti, Yeol Eum has collaborated with major ensembles worldwide such as Gürzenich-Orchester Köln, Konzerthausorchester Berlin, Dresdner Philharmoniker, The Tonkunstler Orchestra at the Grafenegg Festival, Bergen Philharmonic, Orchestre Philharmonique de Radio France, Orchestre de la Suisse Romande, Seoul Philharmonic, St. Petersburg Philharmonic and Moscow Virtuosi among many others.
Yeol Eum performs with conductors such as Dmitri Kitayenko, Valery Gergiev, Vasily Petrenko, Vladimir Spivakov, Andrew Manze, Susanna Mälkki, Omer Meir Wellber, Cristian Măcelaru, Pietari Inkinen, Jonathan Nott, Mikko Franck, Nicholas Collon, Joshua Weilerstein, Joana Carneiro, Pablo González, Case Scaglione, Roberto González-Monjas and Yan Pascal Tortelier.
Across the 20/21 season Yeol Eum serves as Artist in Residence with the Residentie Orkest from the Hague. In front of the Dutch audience and under the baton of conductors Nick Collon, Pablo González and Joshua Weilerstein, Yeol Eum presents a selection of some of the finest concerti of the piano repertoire including Mozart’s Piano Concerto No. 17, Beethoven’s Piano Concerto No.4, Chopin’s Piano Concerto No. 2 and Ravel’s Piano Concerto in G. Beyond Zuiderstrandtheater in the Hague, her residency will take her to some of the major venues across the Netherlands including Amsterdam’s Concertgebouw, Apeldoorn’s Orpheus and Utrecht’s TivoliVredenburg, Yeol Eum also gives a recital at the Hague’s Nieuwe Kirk and a Masterclass at the Hague’s conservatory.
In summer 2019 Yeol Eum made her Royal Albert Hall and BBC Proms debut with the BBC Philharmonic interpreting Mozart’s Piano Concerto No. 15. Her most recent debut with the Liverpool Philharmonic (Beethoven’s Emperor Concerto) was met with high acclaim for which Johanna Roberts wrote: Yeol Eum Son throughout demonstrated the technical excellence partnered with lyrical sensitivity that have made her one of the most sought-after concert pianists in a virtuoso performance that was much appreciated by the audience.

An avid chamber musician, in 2018 Yeol Eum was appointed Artistic Director of Music in PyeongChang, the biggest music festival in her native Korea.

Yeol Eum is Honorary Ambassador of the Seoul Arts Center and her home city of Wonju. A double Second Prize winner at the Tchaikovsky International Piano Competition in 2011 and at the 13th Van Cliburn International Piano Competition in 2009, Yeol Eum Son was a student of Arie Vardi at the Hochschule für Musik Theater und Medien Hannover in Germany, where she now lives. She holds a degree from the Korean National University of Arts.