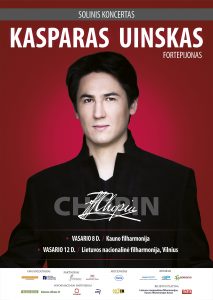 Pianist Kasparas Uinskas is returning for his solo recital to Kaunas Philharmonic hall on 8th of February and to Lithuanian National Philharmonic hall on 12th of February 2020. He has chosen the program of pieces by Frederic Chopin for his recital. “Romantic music is closest to my heart and soul. I understand its language and it is my real pleasure to share it with listeners.” – Uinskas says.

“…his interpretations overcome all limits…” Berlin Philharmonie (Klassik in Berlin)

Tickets: available at box offices of concert halls and online, also at Tiketa